CD155 is a Type I transmembrane glycoprotein in the immunoglobulin superfamily. Commonly known as Poliovirus Receptor (PVR) due to its involvement in the cellular poliovirus infection in primates, CD155's normal cellular function is in the establishment of intercellular adherens junctions between epithelial cells. As an immunoglobulin‐like adhesion molecule, CD155 is involved in cell motility, and natural killer and T cell‐mediated immunity. CD155 is barely or weakly expressed in various normal human tissues, but frequently overexpressed in human malignant tumors. CD155 overexpression promotes tumor cell invasion and migration, and is associated with tumor progression and poor prognosis. CD155 has also been established as an immunomodulatory receptor, able to both activate NK cells through interactions with CD226 (DNAM-1) and CD96 and inhibit them through interaction with TIGIT. 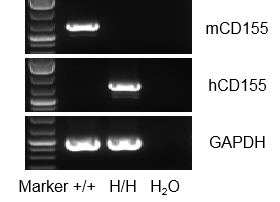