CD47 is an integrin associated protein (IAP) and is an immunoglobulin superfamily member. CD47 is widely expressed on cell surface and interacts with the signal regulatory protein α (SIRPα), thrombospondin-1 (TSP1) and integrins to mediate a series of responses including  apoptosis, proliferation and immunity. CD47 is an important “self” mark on the cell surface and inhibits macrophagocytosis by interaction with SIRPα on macrophage surface. Animal studies have shown that a CD47 antibody is an effective treatment for multiple types of tumors. CD47 is another target for tumor immunity following PD-1/PD-L1. 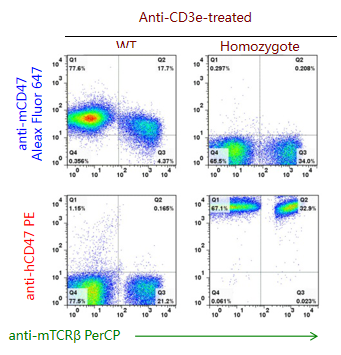 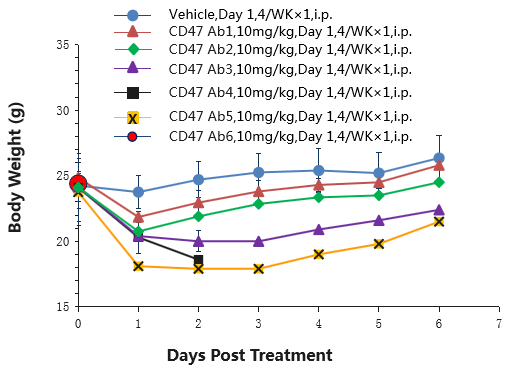 Homozygous B-hCD47 mice were i.p. injected with anti-hCD47 antibodies. Blood from each mice were collected and Blood Routine Test was conducted. Blood from Ab3 and Ab5 groups were not analyzed because of death of the treated mice.

Homozygous B-hCD47 mice were I.P. injected with anti-hCD47 antibodies.Blood from each mice were collected and Blood Biochemical Test was conducted. Blood from Ab3 and Ab5 groups were not analyzed because of death of the treated mice.

Modified murine colon cancer MC38 cells (mCD47 is replaced with the hCD47 extracellular domain, named as MC38-hCD47) were subcutaneously implanted into homozygous B-hCD47 mouse. Mice were divided into control and experimental groups (n=6) when the tumor size was about 150±50 mm3. Anti-hCD47 antibodies differently inhibited tumor growth in the homozygous B-hCD47 mice at 3 different doses, suggesting that B-hCD47 mice is an effective model for in vivo CD47 antibody efficacy study. The average ±SEM of tumor sizes are shown in the figure.